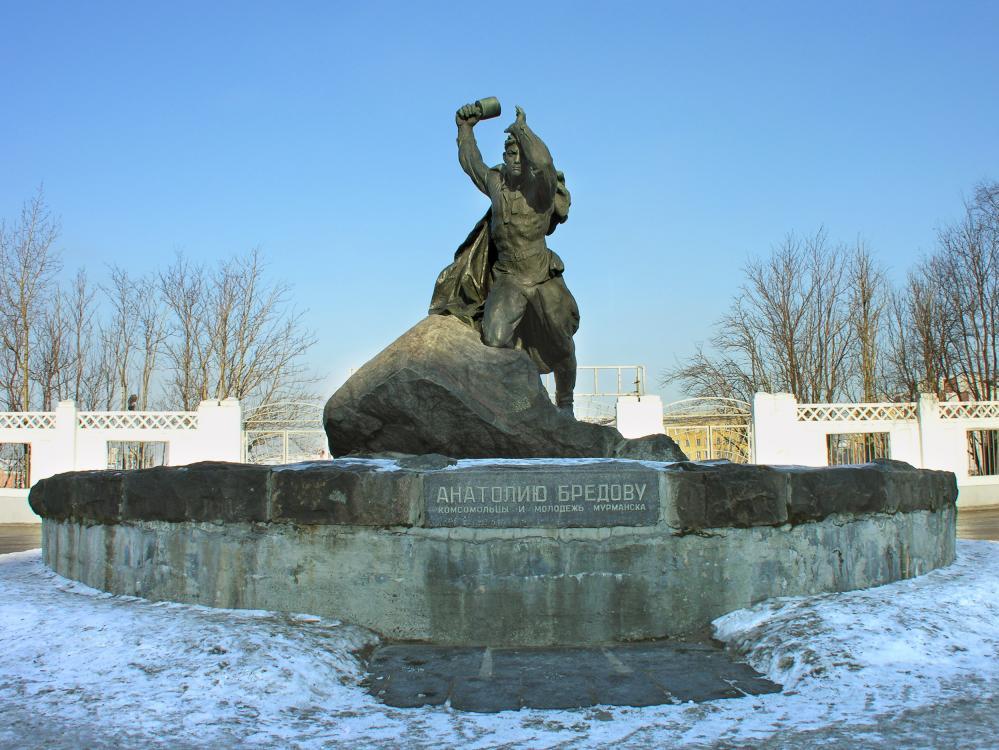 One of the first original sculptures of the city of Murmansk was a monumental monument to Anatoly Bredov. The monument was erected at the expense of the residents of the city. Bredov Anatoly Fedorovich – Hero of the Soviet Union, commander of the machine gun department of the 155th rifle regiment, belonging to the 14th rifle division of the Fourteenth Army of the Karelian Front; served as a sergeant. Bredov A.F. Born July 14, 1923 in the city of Novgorod in an ordinary family of a worker. In Murmansk, he graduated from a seven-year school, and since 1938 he went to work as an electrician in a shipyard in the city of Murmansk. In April 1942, Bredov was called up for military service in the ranks of the Red Army.

In the fall of 1944, the 155th regiment decided to go on the Titovka-Petsamo road and begin the assault on one of the heights called Pridorozhnaya. According to Bredov’s calculation, a machine gun destroyed more than 80 Germans, to which the Germans also responded with shelling. As a result, only the gunner Nikita Ashurkov and Anatoly Bredov himself remained from the ranks of the Soviet soldiers, who began to throw grenades at the Germans. In a hopeless situation, Ashurkov and Bredov hugged and blew themselves up and the machine gun with the last grenade. The remaining soldiers of the 155th Infantry Regiment were so inspired by the action of their comrades that they quickly occupied Roadside Heights. It is worth noting that Ashurkov survived in this battle – he was picked up on the fifth day by fighters from the sanitary battalion. After such a heroic feat, Anatoly Bredov was posthumously awarded the title Hero of the Soviet Union.

In 1956, the idea arose of perpetuating the feat of Bredov, which was the initiative of cadets of the Higher Naval School, who invited the youth of the city to raise funds for the erection of the monument. This caused widespread approval in Murmansk. During subbotniks and Sundays, young people collected waste paper and scrap metal, and then sent the proceeds to a fund specially designed for this purpose. The Komsomol City Council decided to conclude an agreement on the creation of the monument in cooperation with the painting and sculpture factory in the city of Leningrad. The brigade headed by the young talented sculptor G.D. Yastrebinetsky undertook the fulfillment of the order.

The opening ceremony of the monument took place on May 9, 1958. On the day of the monument’s opening, by eight o’clock in the morning, almost the entire population of the city gathered at the intersection of Trade Union Street and Lenin Avenue. During the ceremony, speakers proclaimed fiery speeches and swore eternal allegiance to the country, for the honor of which Anatoly Bredov gave his life. The most important performance of the ceremony was the appeal of Fedor Mikhailovich – the father of the deceased hero, who himself was a front-line soldier. During his speech, he could not hide his excitement when he narrated the life of his son. The first bouquet of flowers that was laid at the foot of the monument was the bouquet of Stefanida Grigoryevna – the mother of Anatoly Bredov.

The height of the sculpture is three meters and depicts a brave soldier during the greatest stress of his physical and moral strength. The right hand is held high and grips the grenade firmly, and the hero expresses deep spiritual strength and readiness in any situation to go to the end, fulfilling his duty to the Motherland. A cloak-tent develops on the figure, which emphasizes the decisiveness of movements, and a dressed tunic fits a strong body, showing the tension of all muscles at the time of the last throw, which forever immortalized Anatoly Bredov in the ranks of the immortal. The warrior stands on a granite block, which in its soulless peace contrasts with the figure of a soldier, full of determination.

The memory of the glorious hero Bredov is alive. As before, the newlyweds carry flowers to him, parents with children come up, and for every military holiday many scarlet carnations and wreaths cover the pedestal.