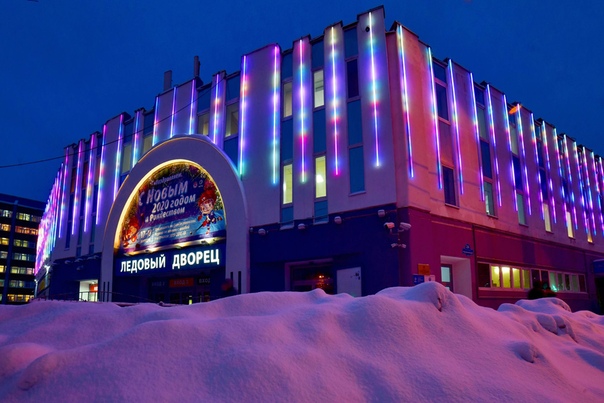 The Ice Palace was reconstructed from a hockey court, which was put into operation in 1967.

On December 28, 1994, the first stage was launched, and on March 16, 2005, the second stage of the Ice Palace reconstruction was completed.
Children and Youth Sports School No. 6 (figure skating and hockey with a ball and a puck), KSSHOR (ice hockey) are constantly engaged in the Ice Palace, as well as training sessions and ice hockey games of the teams of the city national team and veterans of sports, organized groups of ice hockey. The championships of the city and the Murmansk region of the Night Hockey League (NHL), the Barents Hockey League (BHL) are held.

In 2012, the ice arena was reconstructed. A new technological plate of the ice field, concrete with new modern additives, which will allow to achieve better plasticity and durability of the arena, as well as a new refrigeration system, thanks to which it is possible to control and change the ice temperature, have been installed. New glazed hockey boards have been installed, with benches for substitutes and penalized players. The hockey rink today meets all modern European standards.
On weekdays, weekends and holidays, free mass skating sessions are organized for everyone.
Today the Ice Palace is the largest indoor ice rink on the Kola Peninsula. There are 2,052 seats in the Ice Palace hall, of which 1110 are on the Western Stand, 773 on the East Stand and 169 on the balcony.

With the purchase of a special coating for the ice arena, it became possible to hold such sports events as competitions in sports dancing, kick-boxing and boxing tournaments were held in the Ice Palace several times with the participation of world champion athletes.